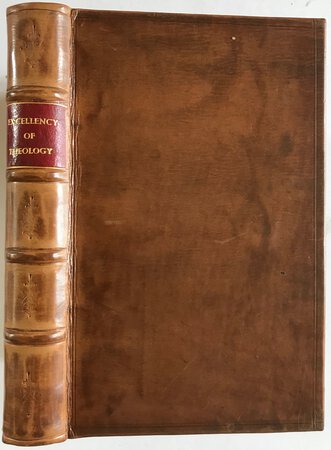 The Excellency of Theology, Compar’d with Natural Philosophy. (as both are Objects of Men’s Study.) Discours’d of In a Letter to a Friend... To which are annex’d Some Occasional Thoughts about the Excellency and Grounds Of the Mechanical Hypothesis... Camb2016

London : Printed by T.N. for Henry Herringman, at the Anchor in the Lower Walk of the New Exchange. 1674. First Edition
8vo, A8, a4, B-Q8, A-C8, last leaf blank, (lacking the second 10-line errata sometimes inserted after the second title-page), the second title-page a cancel beginning “About the Excellency...”, general title a little stained with a very small piece missing from lower blank margin, antique-style calf, morocco label, a good copy with ample margins.
“[He} was much worried by the materialism of his age, feeling that his friends the ‘Virtuosi of the Royal Society had, in their ardent pursuit of ‘Natural Philosophy’, forgotten the Supreme Author of Nature. Boyle accordingly enjoins them to the study of Divine Revelation.” - Fulton p.81
In the second tract he attempts to justify his theory of the Universe (i.e. ‘matter in motion’). “ This is one of the most readable expositions of his Theory” - Fulton p.82.
Reference: Wing B 3955 Fulton 116