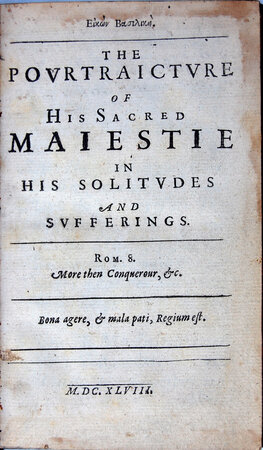 Eikon Basilike (Greek letter). The Pourtraicture of His Sacred Majestie in His Solitudes and Sufferings.

[London: Printed by John Grismond for Richard Royston] 1648 (i.e. 1649). First Edition, second issue
Small 8vo, A4, (A3 mis-signed A4), B-S8, lacking last blank, lacking the folding frontispiece, 4-page Als from Edward Almack to Geo. C. Williamson tipped in at end and on a front fly a long note by Williamson recording that this copy was foundin an old house in Guildford, black morocco, gilt fillet borders, centre panel in gilt and blind with floral cornerpieces, spine with raised bands, gilt flowers in compartments, by Riviere signed on front turn-in, neatly rehinged, edges stained black, probably by the original binder.
An oft-reprinted work, of which Madan lists 51 issues and editions appearing in 1648 and 1649, many of them by printers and publishers being hounded by the authorities and frequently arrested. The bibliography of the early issues is complicated; Edward Almack was the first to investigate them and he gave the present issue (without the names in the imprint) priority. He also claimed that the folding frontispiece was not issued with this edition, and the Pforzheimer Catalogue follows him in this - “... the engraved frontispiece by William Marshall which was intended for several of the later editions”. Madan finds otherwise; identifying this copy as first edition, second issue (it has the scambled pagination in sig. G) and stating that the engraved portrait should be present, although I note that, of the 11 copies he lists as known to him, no less than 4 are described as without the portrait. I have to admit however, that ideally, rare though all early issues undoubtedly are, this one should perhaps have the portrait to be absolutely complete.
Reference: Wing E 268 Madan: New Bibliog. Eikon Basilike. 1b ESTC R18840
Pforzheimer 171