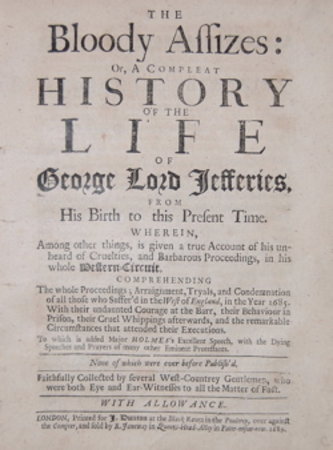 THE BLOODY ASSIZES: OR A Compleat History of the Life of George Lord Jefferies, from His Birth to the Present Time. Wherein, Among Other Things, is Given a True Account of His Unheard of Cruelties, and Barbarous Proceedings in His Whole Western Circuit.

London: Printed for J.Dunton at the Black Raven in the Poultry...and sold by R.Janeway in Queens-Head-Alley in Pater-noster-row 1689. Small 4to, A-I4, 70, [2]pp (ads), small piece missing from blank margin of B2, some deckle edges, slightly browned, disbound.
The title page continues :-
“Comprehending The whole Proceedings; Arraignment, Tryals, and Condemnation of all those who suffer’d in the West of England. in the Year 1685. With their undaunted Courage at the Barr, their Behaviour in Prison; the Cruel Whippings afterwards, and the remarkable Circumstances that attended their Executions. To which is added Major Holmes's excellent Speech with the Dying Speeches and Prayers of many other Eminent Protestants. None of which were ever before Publish'd. Faithfully Collected by several West-Country Gentlemen, who were both Eye and Ear Witnesses to all the matter of Fact. With Allowance.”
The Epistle Dedicatory is signed by James Bent, now acknowledged as a pseudonym of John Dunton. A minor contribution was also made by Titus Oates and the prelims contain a 4-page poem by John Carter.
Reference: Wing T3370A ESTC R23364