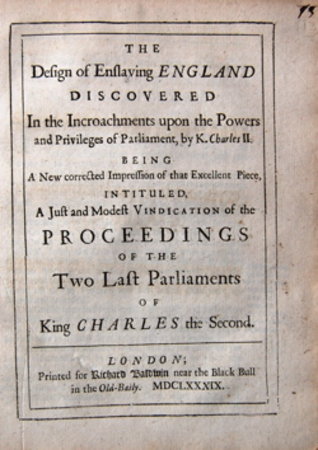 THE DESIGN OF ENSLAVING ENGLAND DISCOVERED. In the Incroachnments upon the Powers and Privileges of Parliament by K. CharIes II. Being a New corrected Impression of that Excellent Piece, Intituled, a Just and Modest Vindication of the Proceedings of The Two Last Parliaments of King Charles the Second.

London : Printed for Richard Baldwin near the Black Bull in the Old-Baily. 1689. Small 4to, [-]2, A-F4, half-title with license on verso, Title-page verso blank, 48 pp, disbound, good.
Originally published in 1681 (Wing F741) at the height of the Exclusion Crisis and republished here for its relevance to the Glorious Revolution.
Halkett & Laing and Wing attribute it to Robert Ferguson; DNB and ESTC opt for Sir William Jones, Attorney General at the time of the Popish Plot, and ESTC suggests that Algernon Sidney and Lord John Somers may have helped Jones.
Reference: Wing F734 ESTC R5506