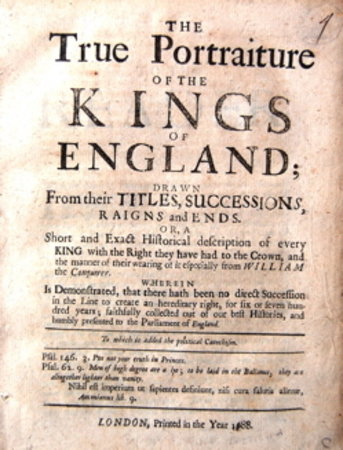 THE TRUE PORTRAITURE OF THE KINGS OF ENGLAND; DRAWN FROM THEIR TITLES, SUCCESSIONS, RAIGNS AND ENDS. Or A Short and Exact Historical description of every King with the Right they have to the Crown, and the manner of their wearing of it especially from Willliam the Conqueror... To which is added the political catechism.

London : Printed in the Year 1688. Small 4to, A2, B-I4, [4], 63. [1] pp, some deckle edges, disbound, good.
Henry Parker was a barrister of Lincoln’s Inn. He held various secretarial posts in the commonwealth government, including secretary to Oliver Cromwell. He had been a central figure in the pamphlet war which accompanied the Civil War where he gained the pseudonym “The Observator”. The present text was first published in 1650 to debunk the royalist claims of the divine right of kings and promote the concept of a supreme parliament, and here reprinted for use in the Glorious Revolution.
Reference: Wing P430 ESTC R2924