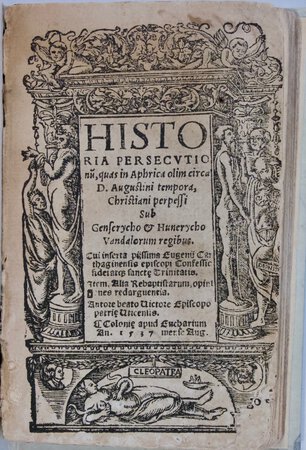 Cologne : Eucharius [Cervicornus] August 1537. Second Edition
Small 8vo, A-I8, title within an architectural woodcut border, large initial “Q” at beginning of text, printer’s device on verso of last leaf, titlepage a little frayed touching the border at fore-edge, A3 skewed in binding and consequently cropped at fore-edge with loss of some letters, some browning, recently re-cased in limp vellum from an old manuscript.
Although rare, this is not the first edition as is often claimed. Adams records an edition [Paris Johann Petit. c.1510] in the University Library and two other copies of that edition are located by the Catalogue Collectif de France.
Victor Vitensis (b. circa 430) was an African bishop of the Province of Byzacena (called Vitensis from his See of Vita). His importance rests on his Historia persecutionis Africanae Provinciae, temporibus Geiserici et Hunirici regum Wandalorum. This is mainly a contemporary narrative of the cruelties practised against the orthodox Christians of Northern Africa by the Arian Vandals. Much of it is an eyewitness account.