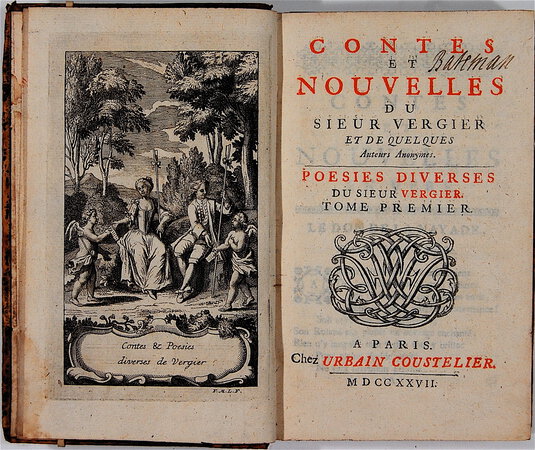 Rouen : Chez Besoigne 1743. Small 8vo, 3 vols in 2, eng. frontis., [vi], 418, [4]pp, + eng. frontis., t-p., 324, [4]pp, + eng.frontis., t-p., 173, [3], 36 pp, title-pages in red and black, contemporary sprinkled calf, 2-line fillet borders in gilt, fully gilt spines lacking title-labels, edges sprinkled red, engraved armorial book label “White - Wellingwells” probably Sir Thomas Woollaston White of Wellingwells. A good sound copy.
The author was for a time ‘president du conseil de commerce’ at Dunkerque, but in 1714 retired to Paris where he became a member of the infamous Societe du Temple, a dining club much given to carousing and debauchery. It was after such a dinner that, one dark night in Montmartre, he was shot dead by a footpad intent on stealing his money. Some of his work was considered good enough to be attributed to La Fontaine,. but as is pointed out by Gay / Lemmonyer “Vergier est plus immoral, plus obscene”, although “Son libertinage n’est pas sans grace”. He was called “the French Anacreon” by Rousseau on account of his drinking songs, none of which were thought to have survived until recently when a manuscript notebook was discovered. (See Justin Croft Catalogue of French Books and Manuscripts January 2012 item 79)
Reference: Cioranescu 17. siecle 65932
COPAC B.L., Oxford, and Manchester only.