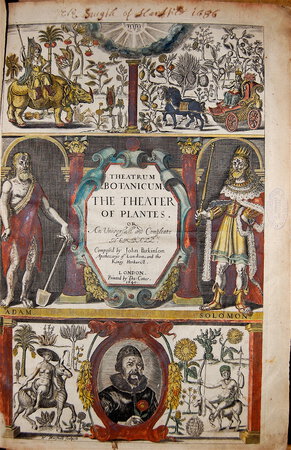 Theatrum Botanicum: The Theater of Plants. or, An Herball of Large Extent: Containing therein a more ample and exact History and declaration of the Physicall Herbs and Plants that are in other Authours, encreased by the accesse of many hundreds of new, rare and strange Plants from all parts of the world.... Collected by the many yeares travaile, industry, and experience in this subject, by John Parkinson Apothecary of London, and the Kings Herbarist...

London : Printed by Tho. Cotes. 1640. Sole Edition
Folio, eng. title, title-page (1 leaf), To the Reader (1 leaf), Dedication (1 leaf, verso blank), laudatory epistles and poems (5 lls), Contents (1 leaf verso blank), Text, pps 1-1755 (with errors), Errata (1 leaf verso blank), complete. Engraved title and the occasional woodcut in the first half of the book coloured by an early hand, tear in last leaf of The Table repaired without loss, a little minor staining but generally a good clean copy with ample margins, 19th century half black morocco, marbled boards, a very sound copy.
Provenance. Signature of “Eliz Smyth of Hartfild(?) 1686” at head of eng. title and signature of “George Smyth” on verso. Faint, small stamp of “Charles Lakin” of Leicester
on foremargin of eng. title. Bookplate of The Horticultural Society of New York on front pastedown.

The author, a London pharmacist, received the title of Royal Apothecary from James I. Later Charles I appointed him as his chief botanist (“Botanicus Regius Primarius”). He had a private garden in Long Acre (Theatrum p.609) in which he grew many rarities. Work on his herbal, which was delayed for a number of years by the success of Johnson’s edition of Gerarde, was greatly helped by the unpublished notes of the French botanist, Matthias L’Obel, who had lived in North London for the last years of his life. The result was an enormous folio work containing descriptions of nearly 4,000 plants (almost 1,000 more than the 1636 Gerarde) including some twenty-eight species not previously recorded in Britain. The most important of these were the strawberry tree from Ireland and the lady’s slipper orchid found in Lancashire.