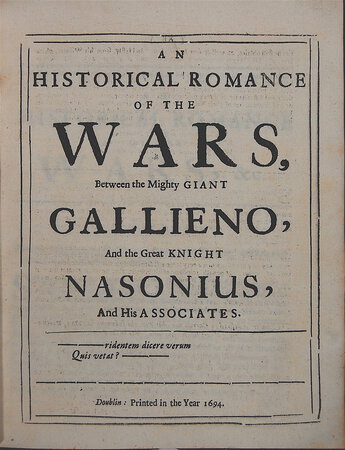 An Historical Romance of the Wars, Between the Mighty Giant Gallieno, And the Great Knight Nasonius, And His Associates.

Doublin(sic): Printed in the Year 1694. First Edition
Sm. 4to, A-L4, [ii], 88pp, contemporary sprinkled calf, front joint split but cords firm, wear at head and foot of spine, a clean and sound copy.
The attribution to Sergeant is given by Wing, and followed by ESTC, but we have found no indication of Wing’s source. John Sergeant is described in DNB as a Roman Catholic controversialist and philosopher who became the fiercest opponent of such as Dr. Hammond, Bp. Jeremy Taylor and Bp. Stillingfleet. His publications as listed by Wing are all concerned with theological or philosophical controversy, whereas the present work is a satirical commentary on the wars between Louis XIV of France and William III of England, (The War of the Grand Alliance, 1688-97), disguised and written in the style of a mediaeval romance of chivalry.
Reference: ESTC R19614 Wing S2570