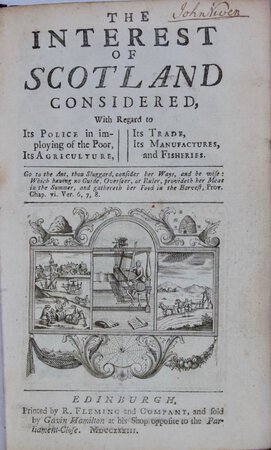 The Interest of Scotland Considered, With Regard to Its Police(sic) in Imploying of the Poor, Its Agriculture, Its Trade, Its Manufacture and Fisheries.

Edinburgh: Printed by R. Fleming and Company and sold by Gavin Hamilton at his Shop opposite to the Parliament-Close. 1733. 8vo, [8], xxxv, [11], 229, [2] pp, (the last leaf is usually bound as the fifth leaf of the prelims. containing Hamilton’s advert. (recto), verso blank), a finely engraved vignette on title depicting various manufacturing activities, on p. xxxiii of The Preface the words “Prince of Orange” have been neatly excised from the text, cont. calf, joints repaired, signatures of “Thomas Nivie” on 1st and 2nd fly-leaves, the latter dated 1735, signature of “ John Niven” on title, cont calf, joints expertly renewed, a good copy.
An important survey of the state of the poor in Scotland and suggestions for ameliorating their condition. Lindsay wants to encourage the manufacture of silk and linen, trade with the West Indies, and fishing, particularly the herring industry which he discusses at length, noting the relative merits of fish from different areas, their taste and their conservation.
Reference: ESTC T17536 Goldsmith's Cat 7057