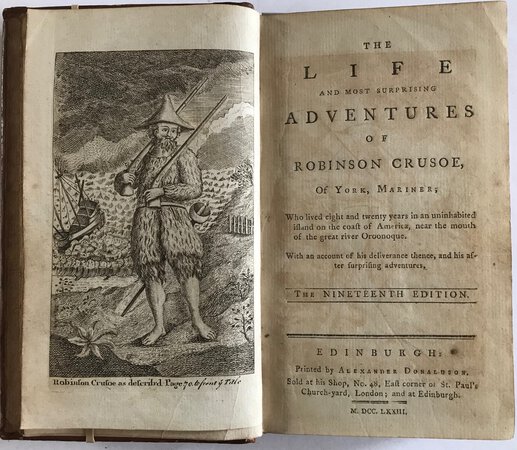 The Life and Most Surprising Adventures of Robinson Crusoe, of York, Mariner; Who lived eight and twenty years in an uninhabited island on the coast of America, near the mouth of the great river Oroonoque... The Nineteenth Edition.

Edinburgh: Printed by Alexander Donaldson. Sold at his Shop, No. 48, East corner of St Paul’s Church-yard, London; and at Edinburgh. 1773. 12mo, [*]2, A-N12, O8, 4 eng. plates, contemporary calf, red morocco label on spine, joints expertly renewed, a good sound copy.
Reputedly based on the experience of Alexander Selkirk, a Scottish castaway who lived for four years on the Pacific island called Mas a Tierra, now part of Chile, which was renamed “Robinson Crusoe Island” in 1966. Another suggeted source for Defoe’s inspiration is Robert Knox’s account of his abduction by the king of Ceylon in 1659. The work is often credited as marking the beginning of realistic fiction, and is one of the most widely published works in English literature.