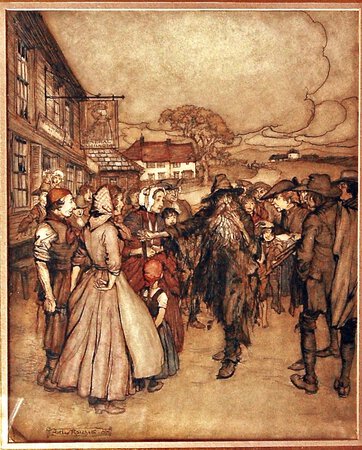 “They Crowded round him, eyeing him from Head to Foot with Great Curiosity”

1960. Original watercolour drawing (330 x 270 mm) of Rip Van Winkle, on his return from his twenty years asleep in the Catskills, surrounded by curious villagers outside the General Washington Inn (formerly the King George III Inn!), signed bottom left “Arthur Rackham ‘05” Framed and glazed in the original Leicester Galleries frame with their ticket on the back. (see below)
“But the first work that greatly advanced his fame in the years immediately following his marriage was his edition of Rip Van Winkle...This lovely book decisively established Rackham as the leading decorative illustrator of the Edwardian period...” [Hudson p.57] An innovation which produced enormous advance publicity for the publishers was the exhibition of the original drawings at The Leicester Galleries; the deluxe edition of the book was fully subscribed before the exhibition closed.
This is much more than just a very fine Rackham watercolour; it is an iconic moment in one of the great stories of world literature. Rip van Winkle is known throughout the English-speaking world and beyond as the man who slept for twenty years. One day, to escape his nagging wife he wanders off into his native Catskill mountains in New York State and falls asleep. He awakes to discover shocking changes. His musket is rotting and rusty, his beard is a foot long, and his dog is nowhere to be found. Van Winkle returns to his village where he recognizes no one. He discovers that his wife has died and that his close friends have fallen in a war or moved away. He gets into trouble when he proclaims himself a loyal subject of King George III, not aware that the American Revolution has taken place. King George's portrait in the inn has been replaced with one of George Washington. And here he is, a bewildered Rip, sleep still in his eyes, outside what is now the General Washington Inn surrounded by villagers he doesn’t recognise.
Reference: Hudson, Derek : Arthur Rackham His Life and Work. N.Y. 1960