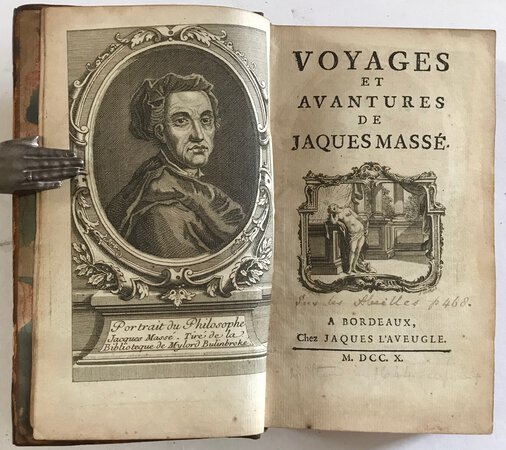 Bordeaux : Chez Jaques L’Aveugle. 1710 [ but not before 1742]. [4th edition]
12mo, eng. portrait of Jacques Masse, 3 leaves, 508 pps, title-page vignette of a nude woman, old mottled calf, marbled endpapers, recently rebacked and corners renewed, spine fully gilt, red edges, a few ms. marginalia in pencil in the early pages, early signature of “Edward Scudamore M.D., St. George’s Place, C....ty”on verso of front end-paper and of “G.S. Morley” on front fly-leaf, a good sound copy.
According to Rosenberg this is the fourth (his ‘edition D’) of four editions all dated 1710, the earliest of which was probably issued in The Hague c. 1714-1717. It has all the issue points that he mentions; the nude woman vignette, the imprint spelt “Bordeaux”, *1 missigned *2, A6 missigned H6, and P3 unsigned, and from the watermark he dates it ‘not before 1742’.
Tyssot de Patot, a firebrand Huguenot free-thinker, sets his imaginary voyag (or as P.D. Gove argues, rather an ‘extraordinary’ voyage; making the distinction between narratives which the authors admit to being fantasy and those which are passed off as genuine voyages), as had Vairesse before him, in Australia drawing for his description of the country on the accounts of real travellers such as Dellon and Lahontan. Here his hero discovers a well-organised Utopia and makes the very prescient observation of the importance of mining and irrigation in that country.
Reference: Cioranescu 18me 62587 Gove : Imaginary Voyage in Prose Fiction. p.217
[Rosenberg: Tyssot de Patot & His Work... pps 86-90]