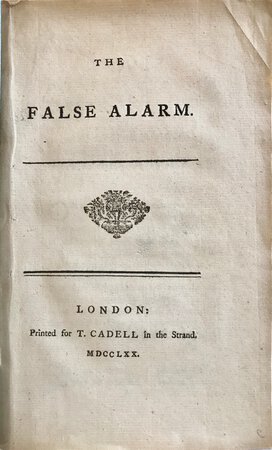 London: Printed for T. Cadell in the Stand. 1770. First Edition, first issue
8vo, (210x130mm) 53, [1] pp, (lacks half-title), disbound, inserted into sugar-paper wrappers, a good, clean copy
The first of two political pamphlets written by Johnson while living with the Thrales at Streatham Park; it is a fierce, legal argument in defence of Parliament’s rejection of John Wilkes’ election as MP for Middlesex and, according to Mrs Thrale, it was Johnson’s favourite pamphlet.
Rare on the market. Of the four impressions printed in 1770 this is the first, according with all the issue points ennumerated by Todd. “As is common with such small pamphlets the half-title is often missing”- Fleeman
Reference: ESTC T89378 Todd: "Concealed editions of Samuel Johnson", ’Book Collector’,Vol. 2(1953)pp.59-60 Fleeman 70.1FA/1a