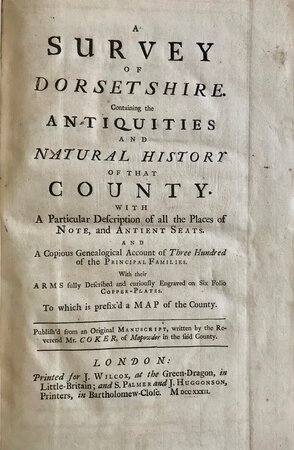 A survey of Dorsetshire. Containing the antiquities and natural history of that county. ... And a copious genealogical account of three hundred of the principal families. With their Arms fully described and curiously engraved on six folio copper-plates. To which is prefixed a map of the county

London : Printed for J. Wilcox, at the Green-Dragon, in Little-Britain; and S. Palmer and J. Huggonson, Printers, in Bartholomew -Close, 1732. Folio, [A], B-Z, Aa-Pp2, [4]. 128, [20] pp large folding map, 6 engraved plates, some browning throughout, 19c. half morocco, marbled bds, expertly re-backed. old back laid on, armorial bookplate of “John Bond, Grange” on front pastedown, a sound copy.
“The work is in fact by Thomas Gerard (1592–1634), who married Anne, daughter of Robert Coker of Mappowder. Through his own and his wife's family he was connected to many of the leading gentry families of Dorset. He wrote his 'General description' of the county in the 1620s, and it was the first systematic description of the history and topography of the county and the genealogy of its prominent families. On Gerard's death the manuscript passed into the hands of the Coker family and was published in 1732 as John Coker's work. A facsimile version of the survey was published in 1980, and the authoritative afterword by Rodney Legg established its true authorship.” - ODNB under “Coker”

This copy we bought in 1970’s from Col. Bond at Creech Grange, Wareham, which had been the seat of the Bond family since 1691.