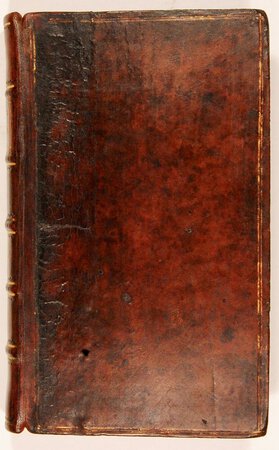 The Travels and Adventures of James Massey. Translated from the French [by Stephen Whatley]

London: Printed for John Watts, at the Printing Office in Wild-Court near Lincoln’s-Inn Fields. 1733. First Edition in English
12mo, A6, B-O12, P6, engraved front. by G. Van Gucht, title in red and black, (viii), 318, (6) pp, contemporary calf, re-backed, engraved bookplate “Library, Brocket Hall” on front pastedown and another, crowned “C” above “Panshanger” on front fly, a sound copy.
Tyssot de Patot, a firebrand Huguenot free-thinker, sets his imaginary voyag (or as P.D. Gove argues, rather an ‘extraordinary’ voyage; making the distinction between narratives which the authors admit to being fantasy and those which are passed off as genuine voyages), as had Vairesse before him), in Australia drawing for his description of the country on the accounts of real travellers such as Dellon and Lahontan. Massey and his companions are shipwrecked on an island in the South Seas and Tyssot describes them establishing a camp, building a raft and then recounts their discoveries of the flora and fauna of the island. They eventually discover, in the interior, an advanced civilisation living in a land of plenty, and the radical ideas and advanced free-thinking that are discussed with their hosts makes it unsurprising that the early editions in French often carried a false imprint.