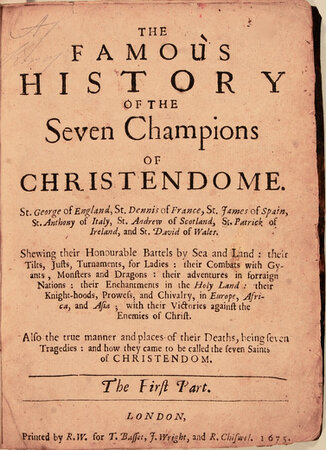 The Famous History of the Seven Champions of Christendom. St. George of England, St. Denis of France, St. James of Spain, St. Anthony of Italy, St. Andrew of Scotland, St. Patrick of Ireland, and St. David of Wales. Shewing their Honourable Battels by Sea and Land: Their Tilts, Justs, Turnaments, for Ladies: Their Combats with Gyants, Monsters and Dragons: Their Adventures in Foreign Nations: their Enchantments in the Holy Land: Their Knighthoods, Prowess, and Chivalry, in Europe, Africa, and Asia; with their Victories against the Enemies of Christ. Also the true manner and places of their Deaths, being Seven Tragedies: and how they came to be called, The Seven Saints of Christendom. The First (Second) part.