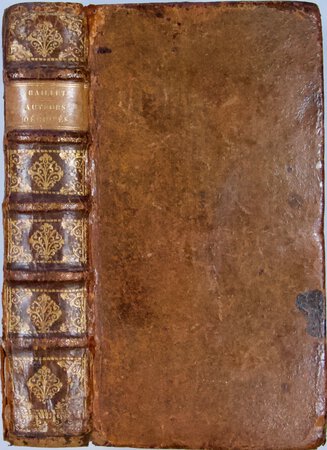 Paris : Chez Antoine Dezallier... 1690. First Edition.
12mo, xxv, [2], 615, [1] pp, eighteenth century French mottled calf, fully gilt spine, joints cracked, cords firm.
The earliest French work on anonymous books. Baillet was, from 1680 to his death, librarian to M. de Lamoignon, advocat-general to the parlement of Paris, of whose library he produced a manuscript catalogue raisonné in 35 folio volumes.
It seems ironic that one should need to consult Barbier to discover the author of this pioneering work, but the effort is rewarding, for there we read that - “Cet ouvrage [etait] le premier publié en France sur ce genre de recherches bibliographiques”. This was a preliminary treatise, which should have been followed by a “Recueil des Auteurs Déguisés” but unfortunately the author died in 1706 leaving his work unfinished, and it was not for another 100 years, with the publication of Barbier’s Dictionnaire des Ouvrages Anonymes in 1806, that the project was finally completed. In his preface Barbier pays eloquent tribute to the erudition of his predecessor.