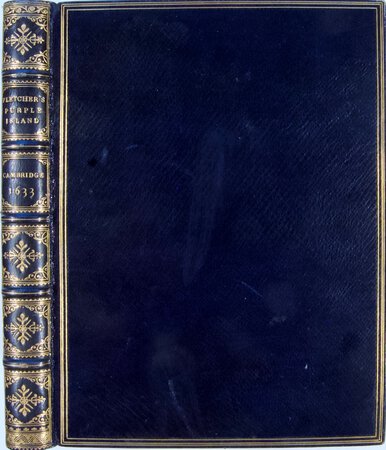 The Purple Island, or The Isle of Man: Together with Piscatorie Eclogs and other Poeticall Miscellanies. by P.F.

Cambridge : Printed by the Printers to the Universitie... 1633. First Edition
Small 4to, ¶-¶¶4, A-Z4, [-]2, A-M4, O-R4 (M3&4 signed N1&2) ¶1, Z4 and [-]1 blanks and lacking, title in red and black within a border of type ornaments, rubricated printer’s device ( McKerrow 416b) on title and a larger version (McKerrow 327) at the end of each Canto, separate title to “Piscatorie Eclogs” within same border, with printer’s device (McKerrow 327), general title washed, tear in ¶4 mended without loss, early 20c. blue morocco, triple-fillet gilt borders, fully gilt spine, turn-ins with a floral roll in gilt, a.e.g., fine.
Fletcher's Eclogs on fishing and young fishermen are some of the earliest of their genre and were much admired by Isaac Walton.
“The break in the signature sequence and the corresponding gap in the pagination are apparently the result of miscalculation when the copy was divided between compositors. The signatures of M3 and 4 indicate that the error was noticed” - Pforzheimer Catalogue 376