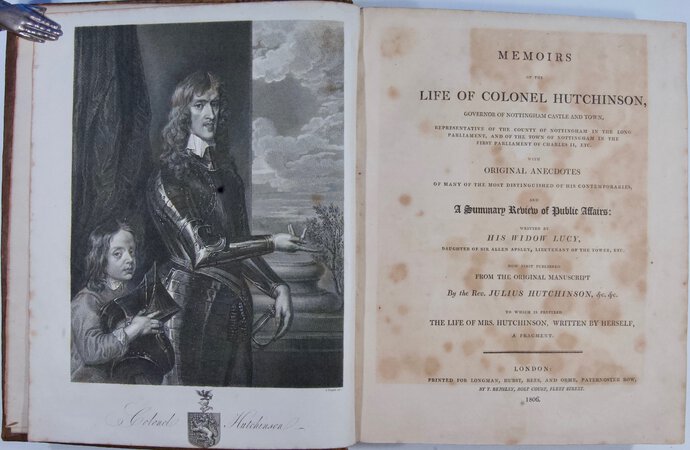 Memoirs of the Life of Colonel Hutchinson, Governor of Nottingham Castle and Town... with Original Anecdotes... and a Summary Review of Affairs: Written by his Widow Lucy... now first published... by Rev. Julius Hutchinson...

London: Printed for Longman, Hurst, Rees, and Orme... by T. Bensley... 1806. First Edition
4to, [8], xiv, [2], 446 pp, 2 engr. ports., folding genealogical chart, sepia aquatint of Nottingham Castle, and engraved plan, title-page foxed, contemporary tree calf, red mor. label, engraved armorial bookplate of “Richard Langley Esq.” on front paste-down. A sound copy.
Col. John Hutchinson (1615-64) succeeded his father in 1646 as M.P. for Nottinghamshire, and like him took the parliamentary side in the Civil War. He signed the king’s death warrant but was saved from expected reprisals at the Restoration by his early demonstration of contrition, and the influence of his kinsmen, Lord Byron and Sir Allen Apsley. “His fame rests on his wife’s commemoration of his character, not on his own achievements”. - Prof. C.H.Firth in D.N.B.