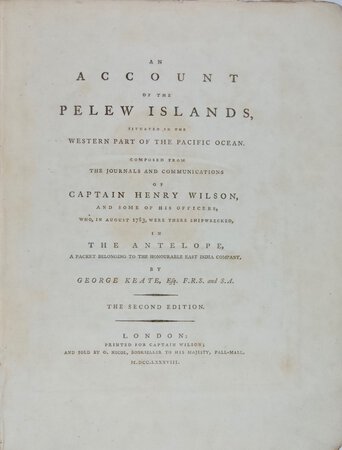 An Account of the Pelew Islands... Composed from the Journals and Communications of Captain Henry Wilson and some of his officers, who, in August 1783, were there shipwrecked, in the Antelope, a Packet belonging to the Honourable East India Company... The Second Edition.

London : Printed for Captain Wilson; and sold by G. Nicol, Bookseller to His Majesty, Pall Mall. 1788. 4to, [-]4, a-b4, c2, B-Z, Aa-Zz, 3A-3B4, 3C1, engr. port, folding map and 15 engr. plates, waterstain to lower part of most plates (but not the text), uncut in original boards, worn.
This gripping tale of shipwreck on a Pacific island, friendly natives, and eventual salvation by means of a small boat built from the wreckage, was deservedly popular throughout the nineteenth century. It is a true narrative but with all the romantic appeal of ‘desert island’ classics such as Robinson Crusoe and The Swiss Family Robinson. The King of Pelew’s son, Prince Lee Boo, arrived in London with the returning party and was lionised by society, contributing significantly to the contemporary idea of ‘the noble savage’.
Reference: Cox II. 302