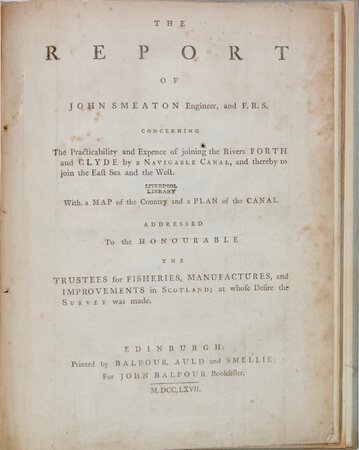 < >
One of the largest civil engineering projects of the eighteenth century
SMEATON, John F.R.S. (1724-92)

The Report of John Smeaton Engineer and F.R.S. concerning The Practicality and Expence of joining the Rivers Forth and Clyde by a Navigable Canal, and thereby to join the East Sea with the West. With a Map of the Country and a Plan of the Canal....

Edinburgh: Printed by Balfour, Auld and Smellie; For John Balfour Bookseller. 1767. First Edition
4to, [-]1, A-E4, 1 leaf, 35, [5] pp, two folding maps, the “General Map of the Country...” with some staining and off-setting strengthened in the folds, “Plan of the Canal...” washed and backed with tissue, some foxing throughout the text, modern paper boards. The Liverpool Library copy with a discreet stamp on title and plates.
The Forth and Clyde was Smeaton’s largest project, indeed it was one of the largest civil engineering undertakings of the eighteenth century, and Britain’s first watershed canal, 28 miles long. This report was written in 1764 but printing delayed till 1767; and by the time it was finally built (1768-90), although the route remained the same the terminations had been modified.