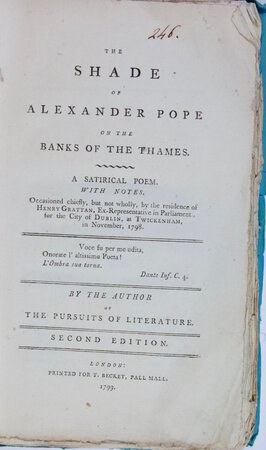 The Shade of Alexander Pope on the Banks of the Thames. A Satirical Poem. With Notes. Occasioned chiefly, but not wholly, by the residence of Henry Grattan, Ex-Representative in Parliament for the City of Dublin, at Twickenham, in November, 1798. By the Author of The Pursuits of Literature. Second Edition.

London : Printed for T. Beckett, Pall Mall. 1799. 8vo, [-]2, B8, B-E8, F4, [4], 86 pp, with hf-title, lacking advert. leaf at end (F4), hf-title a littles soiled, last 3 leaves foxed and frayed, uncut, stab-stitched as issued, modern blue paper wrappers, bookplate of Percival F. Hinton inside front wrapper.
Mathias was a satirist who crossed swords with many of the eminent writer of his day. He held that literature is an important tool of government and was vehemently anti-catholic.
Henry Grattan (1746-1820), Irish patriot politician and a champion of catholic emancipation, gained a reputation as "the most electrifying set-piece patriot orator in the [Irish] House of Commons”. In 1798 however, having travelled to England to give evidence in the trial of Arthur O’Connor, he was in such low favour at home that he remained in England for the next two years. The present poem is remarkable for the size of its footnotes which must be approaching ten times the length of the poem. On page 44 for example begins a footnote attacking William Godwin and Mary Wollstoncraft which extends over the next ten pages, with its own footnotes: It reduces the poem to a single line per page.
Reference: Halkett & Laing V. p.240