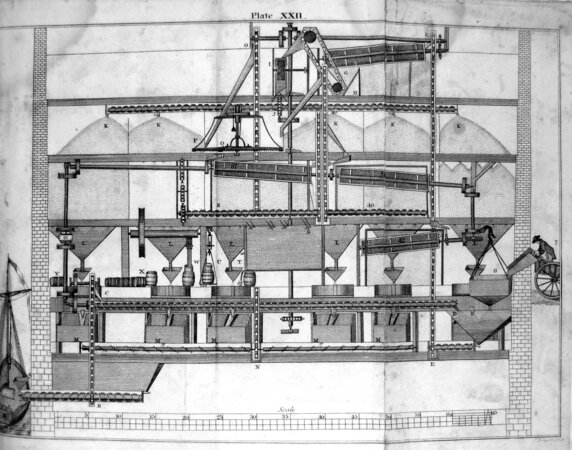 Philadelphia : M. Carey and Son, Chest-nut Street. 1821. 8vo, [-]4, B-Z, Aa-Zz, 3A4, 26 engraved plates (numbered 1 to XX1V, XXV11 & XXV1), heavily foxed throughout as usual, cont. sheep, neatly rebacked, old label, corner repaired. A sound copy.
The fourth edition (first published 1795) of the first book on power grain milling and a landmark of early American technology. Writing in 1935 Bathe says of it “There is to this day, at least one mill owner known to the writer, who has a copy of Oliver Evans’ Mill-wright in his office to which he says quite frankly he refers often, considering it is still in many repects the most practical work for millers ever published”. As a practical handbook it is hardly surprising that copies, where they have survived, are usually in poor condition.
Reference: Bathe, G. & D. : Oliver Evans. A Chronicle of Early American Engineering. 1935 p.47